Karl Marx visited Vienna in August-September of the revolutionary year of 1848. He went to Vienna to establish contacts with democratic and workers’ organisations, and to collect money for the publication of the Neue Rheinische Zeitung. He also spoke at the first Vienna Workers’ Association on social relations in Europe and the place of the proletariat in the revolutionary struggle and on wage labour and capital. (1) In October of the same year the uprising in Vienna ended in a victory for the counter-revolution. Marx wrote about this defeat in the Neue Rheinische Zeitung. (2)

The circumstances for a definitive proletarian revolution were not fulfilled during Marx’ life, but leaving the Habsburg Empire and its restoration behind, socialists got new chances after World War I. After World War I the Danube Monarchy fell into pieces and unemployment and homelessness had surged. Many Viennese were camping out in the Vienna Woods, living on mushrooms. The first free communal elections in Vienna were held on the 4th of May in 1919. Vienna became the first city of over a million inhabitants to appoint a social democratic administration. This ,,New Vienna’’ became a unique socio-political experiment, between 1919 and February 1934, the year in which the disruption of democracy in Austria began. The experiment embraced and reformed all spheres of life: from social and health policy to education and housing.

To finance the socialist experiment the city councellor of finance Hugo Breitner introduced a socially progressive taxation system, in order to develop housing constructions and different luxury taxes on riding-horses, large private cars, servants in private households and hotel rooms. This resulted into more than 380 municipal housing estates with over 64.000 flats, built between 1923 and 1934, thanks to the ,,Breitner-Taxes’’. (3) 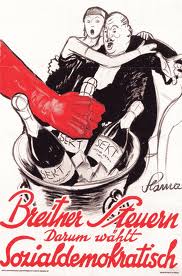 The most famous project was the ,,Karl-Marx-Hof’’ in the northern Heiligenstadt District. It was built between 1926 and 1933 according to the drafts of architect-urban designer Karl Ehn, a pupil of the famous Otto Wagner. It accommodated 5.000 people in 1.382 flats. The motto of the project was ,,brightness, air and sun’’, only about 18% of the available 15,6 ha were built up; the rest was and is still thoroughfare, playing ground and green. It is 1.100 m long, built on the edge of the Vienna Woods and colored red, ochre, blue, with golden statues of heroic working class mama’s and papa’s here and there. Karl-Marx-Hof holds the distinction of being the longest single residential building in the world.

Furthermore there were two central wash houses, two baths, two kindergartens, a dental clinic, a mothers advice centre, a library, a youth centre, a post office, a health insurance centre offering ambulatory care, a chemist’s an 25 other premises. (4) The tenants of the new flats were chosen on the basis of a ranking system in which e.g. persons with handicaps got extra points to be chosen earlier. Forty percent of building costs were taken from the proceeds of the Vienna Housing Tax, the rest from the proceeds of the Vienna Luxury Tax and from federal funds. Using public money to cover building costs allowed the rents for these flats to be kept very low: for a worker’s household, rent took 4 percent of household income; in private buildings it had been 30 percent. If tenants became ill or unemployed, rent payments could be postponed. Julius Tandler, socialist city councilor for social and health services at that time put it this way: “What we spend for youth homes we will save on prisons. What we spend for the care of pregnant women and babies, we will save in hospitals for mental illnesses.” (5)

While this architectural masterpiece of Ehn still stands today, the ideas that animated it were destroyed when the guns of the fascists fired on the Karl-Marx-Hof in 1934. The Karl-Marx-Hof became a battlefield during the Februaraufstand of the 1934 Österreichischer Bürgerkrieg. The socialists engaged in the revolt against the paramilitary Heimwehr of the Austrofascist party barricaded themselves inside the building and were forced to surrender after the Austrian army and the police bombarded the site regardless of the unarmed dwellers, mainly worker families, with artillery. Today the streetname recalls this event with the 12. Februar Platz.

The fascist leader and chancellor Engelbert Dollfluss had founded a fascist regime after a parliamentary crisis and military putsch since the 4th of March 1933. In May 1933 the Austrian Communist Party was forbidden. Paramilitary socialist groups like the Republikanischen Schutzbund underwent the same rule. On the 21th January of the following year the Arbeiterzeitung was forbidden. The headquarters of the socialist party was closed and the weapons of the paramilitary organizations were confiscated. From the 12th of February on there were cruel fights in all big Austrian cities. The center of the resistance was Vienna. In the country however there was no fight. A call for general strike wasn’t followed and the army and police remained loyal to the state and Dollfluss. When the Austrian army began with artillery fire the rebellion came to an end very fast. More than 1.600 people died in the conflict. Nine leaders of the Schutzband ended their life on the gallows. Many others were prisoned in a camp. Others escaped to Czechoslovakia. All worker unions and organizations were forbidden from then on. (6)

During the Anschluss, Karl-Marx-Hof was renamed Heiligenstädter Hof, but took its original name back in 1945. In 1938-’39 66 families were expelled from the complex by the Nazis. 29 inhabitants of the Karl Marx-Hof died in the Holocaust. Only many years after the Second World War a black memorial plate was put on the façade of the building. The heavy artillery damage to Karl Marx-Hof was repaired only in the 1950s. The building was refurbished between 1989 and 1992.

The weird fascinating blend of large-scale housing construction, Wagner-style Modernism, and visionary socialism still impresses today, when you walk through the Palladian entries closed by heavy iron gateways. The complex has been used as a filming location for some movies, most notably the Cavani-film Night Porter.

A link to a nice didactic short film about Karl-Marx-Hof:

1 Response to Karl Marx in Vienna